Best of Burma - Delve into what each area has to offer!

If monkeys didn't ambush you on your trip to Asia then you are the chosen one. If you have, you’ll know it is shocking, hilarious and traumatic all at the same time. This incident happened to us, and particularly, my dear friend Andrea, a Crossfit trainee, with bulging biceps and questionable eyesight encountered the action. After a long temple hike, while we were descending downstairs, a group of monkeys spread themselves in a particular joint and spooked everyone who passed through the spot. Since I was walking behind my friend, I knew something was up. To his surprise, a monkey climbed the top of the roof, all the way around to face his back and jumped onto his neck. In a jiffy, his glasses were snatched, leaving him in a state of shock. Mind you, those were his spectacles and not sunglasses. And, I had my eyes and jaws wide opened as I couldn’t fathom what I had witnessed. Did I want to burst into laughter? ‘Oh, yes.’ On seeing my friends despair we managed to save the laughter for afterward. Luckily a local vendor who was selling peanuts came to his rescue. She threw cache of peanuts at the monkey until he was appeased enough to chuck the glasses. The spectacles landed close to his legs, and he was quick to brace them back. We thanked the lady endlessly and bid her and the monkey goodbye and rushed as fast as we could. Later, when we got into our car, after a moment of silence, we glanced at each other and broke into a barrel of laughs.

(Happened at our trek down from Mount Popa, Bagan) 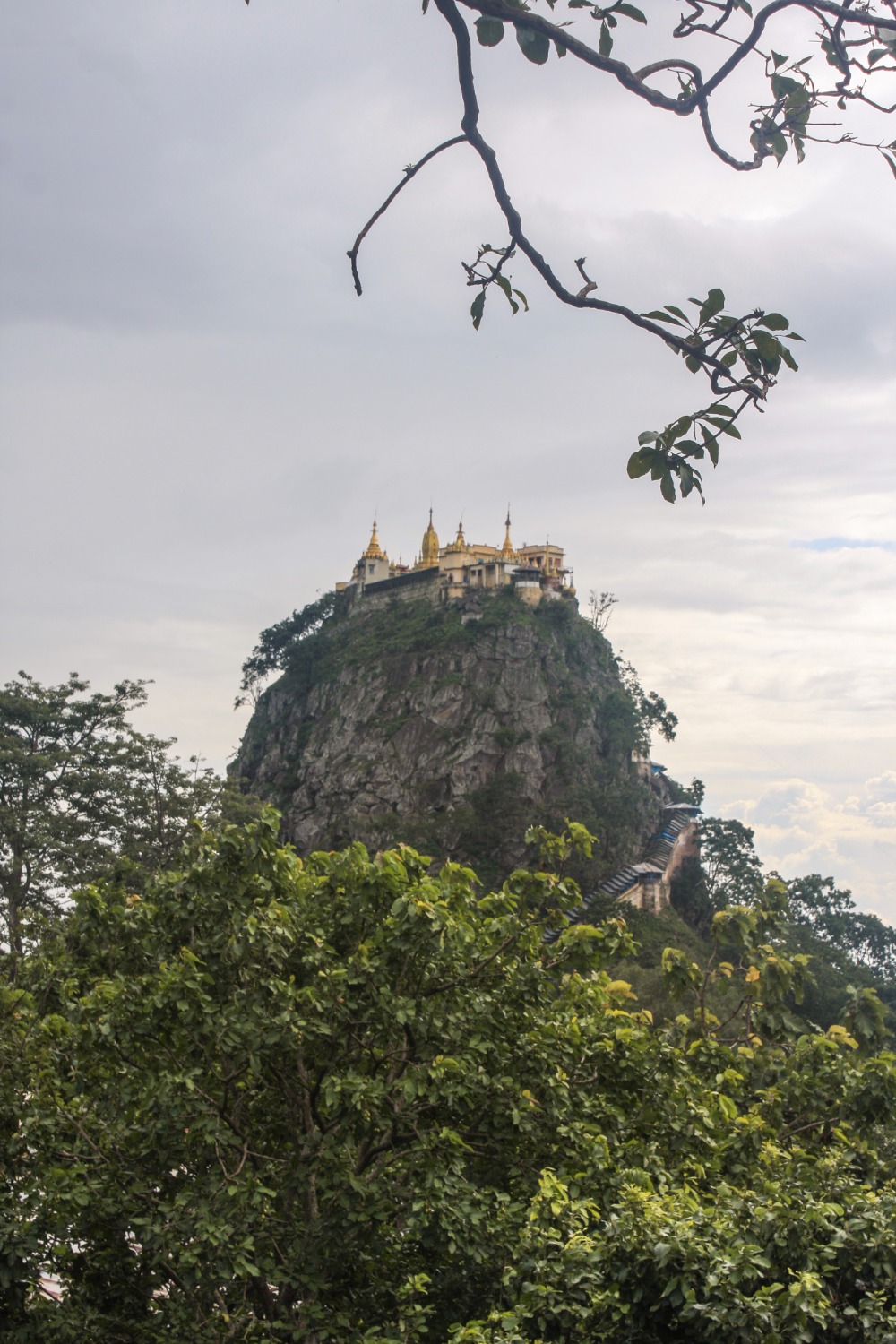 The once mysterious Myanmar that was shut entirely for and from the outside world is now warming up to tourism. I’d suggest you catch the wave or miss the boat! It can be overwhelming to choose from the explored and the restricted lands of Burma, the below selection cite the versatility of the country and benefits you in planning the nature of your trip.

Located in the south of Burma, up until 2005, Yangon was the capital of Myanmar, and it still is a place where most travelers and tourist start their Journey as it has the highest accessibility of International flights. The first things you’ll probably notice in Yangon if you land during the peak hours are the long queued traffic and the chaos. After you’ve made peace with the traffic, be sure almost everyone is going to direct you to visit the famed ’Shwedagon pagoda’ and rightly so. One of the wonders of the world, towering 98 meters high in a golden dome doesn’t fail to enchant people of all walks. As much as you may be tempted to skip the chaotic cityscape, I’d suggest you give it a chance and get on with it, what awaits you shall surprise you. One of the primary modes of transportation throughout Yangon are buses, and unlike most of SE Asia where motorbikes flourish, they are banned from central Yangon. Sprawling markets, decaying buildings and street food stalls thrive on the streets of Yangon. A mix of British colonial architecture, modern high-rises, and gilded Buddhist pagodas define its skyline.

In western Shan State, you will find the picturesque Inle Lake, famous for its floating villages and gardens and the unique lifestyle of the locals, with living communities based entirely on the water. From Yangon, you can head to Inle Lake by bus, train or plane. If you want to save time and have the most comfortable journey, then there is nothing better than a flight from Yangon to Inle Lake. The lake measuring 22 km long, located in a valley between two mountain ranges, feels like a different world to the rest of Myanmar. In the villages across the lake, wooden houses are built on stilts, and fishers steer their one-person boats in a characteristic rowing style, with one leg wrapped around their oar. Inle is one of Myanmar’s most popular destination for travelers, so when you travel around the lake, part of what you see is inevitably geared towards tourists. Inle Lake settlement is most famous for it’s floating market. It also has various handicraft workshops where you’ll spot the Kayan women wearing the traditional rings that elongate their necks. And the monastery, The Phaung Daw Oo Pagoda, one of the holiest sites in Shan State, visited by worshippers from all around Myanmar. The shrine is enormous and features five ancient golden Buddhas.

Fisherman at the Inle lake during sunset.
Floating Village of Inle lake
A Fisherman going about his business.
Phaung Daw Oo Pagoda.

Bagan is on the itinerary of almost every traveler while in Burma: the vast, grand scale of the exteriors (numbering over 2,000 temples) contrasts with the extraordinarily intricate detailing of the interiors to make for a truly unique experience. Some of them have been re-created and reworked on due to the earthquakes that have left the structures deformed. The viewing of the dramatic sunsets and sunrises with thousands of pagodas and stupas in the foreground are probably the best in the whole world. Although the hot air balloon is a seasonal occurrence, opt for it when available as it makes for a magical ride. Many sunset points involved climbing on top of the pagodas, once open to the public, are now closed involving the safety hazards of tourists. Apart from the beautiful sunset you also can revel in the Kayay Street of New Bagan which has plenty of local and international eateries to dive into and a chance for rendezvous with locals and other fellow travelers. 50 kilometers to the Southeast of Bagan, Mount Popa, offers panoramic views of the surrounding plains from its 1,518 m summit. The famous and sacred monastery, Popa Taungkalat, sits dramatically atop a volcanic plug on its slopes. Although the view from afar the mountain is terrific, the thread up the whole path is left to the travelers' discretion. With monkeys knocking things off of your hands and leaving the place unkempt, I’d say be warned. 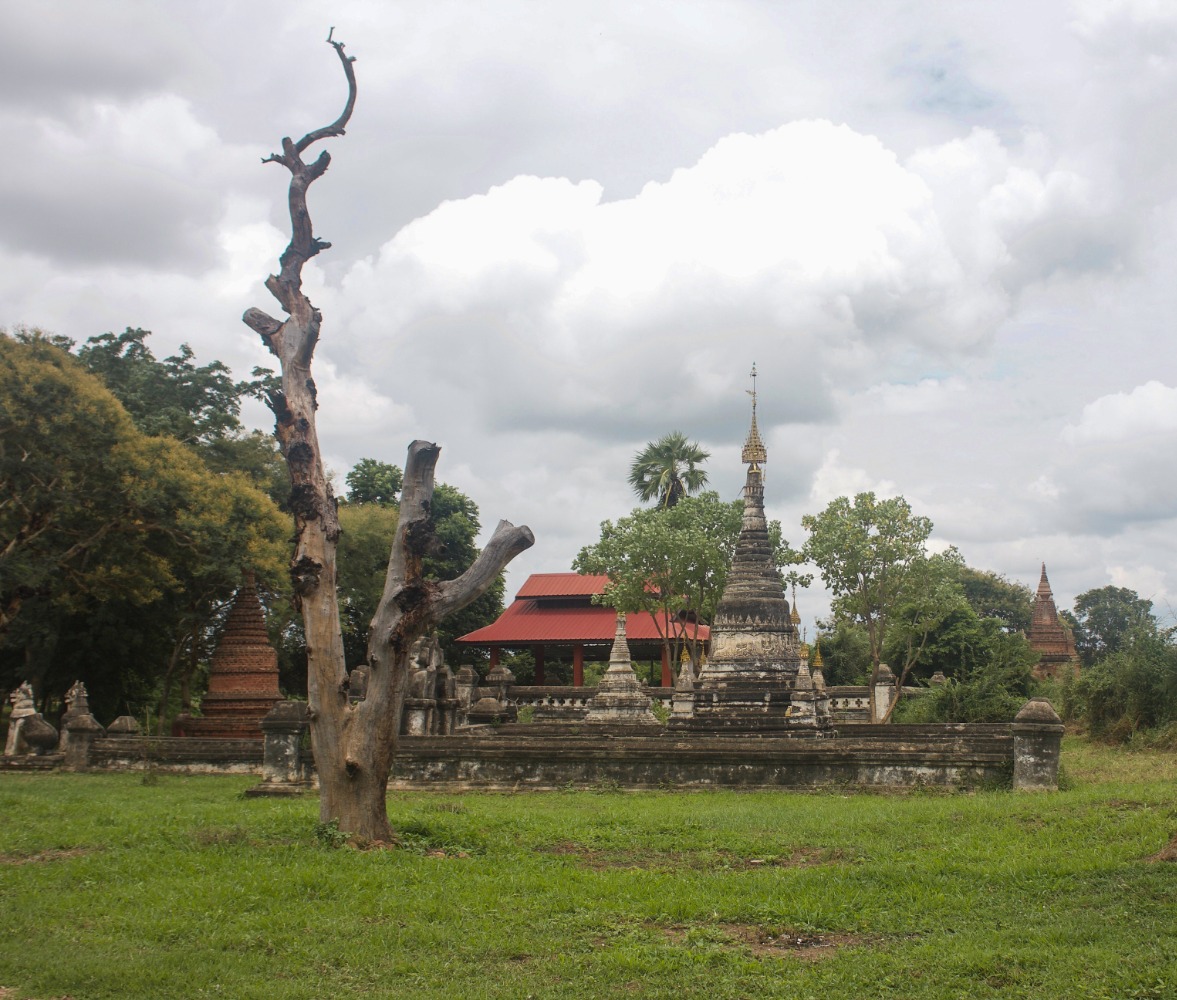 {"items":["a4b0c5_c589ec8efe084bb7a778405d92a2891a~mv2.jpg","a4b0c5_e2a1c0a69bc04bceb1a3ffe56adc27b6~mv2_d_2592_3888_s_4_2.jpg"],"styles":{"galleryType":"Columns","groupSize":1,"showArrows":false,"cubeImages":true,"cubeType":"fill","cubeRatio":0.75,"isVertical":true,"gallerySize":300,"collageAmount":0,"collageDensity":0,"groupTypes":"1","oneRow":false,"imageMargin":5,"galleryMargin":0,"floatingImages":0,"chooseBestGroup":true,"smartCrop":false,"hasThumbnails":false,"enableScroll":true,"isGrid":true,"isSlider":false,"isColumns":false,"isSlideshow":false,"cropOnlyFill":false,"fixedColumns":2,"enableInfiniteScroll":true,"isRTL":false,"minItemSize":50,"rotatingGroupTypes":"","rotatingCubeRatio":"","gallerySliderImageRatio":1.7777777777777777,"numberOfImagesPerRow":2,"numberOfImagesPerCol":1,"groupsPerStrip":0,"borderRadius":0,"boxShadow":0,"gridStyle":1,"mobilePanorama":false,"placeGroupsLtr":false,"viewMode":"preview","thumbnailSpacings":0,"galleryThumbnailsAlignment":"bottom","isMasonry":false,"isAutoSlideshow":false,"slideshowLoop":false,"autoSlideshowInterval":4,"useCustomButton":false,"bottomInfoHeight":0,"titlePlacement":"SHOW_ON_HOVER","galleryHorizontalAlign":"center","galleryTextAlign":"center","galleryVerticalAlign":"center","scrollSnap":false,"itemClick":"link","fullscreen":false,"allowSocial":false,"allowDownload":false,"allowTitle":true,"allowDescription":false,"loveButton":false,"loveCounter":false,"videoPlay":"onClick","scrollAnimation":"NO_EFFECT","scrollDirection":0,"overlayAnimation":"NO_EFFECT","arrowsPosition":0,"arrowsSize":23,"watermarkOpacity":40,"watermarkSize":40,"useWatermark":true,"watermarkDock":{"top":"auto","left":"auto","right":0,"bottom":0,"transform":"translate3d(0,0,0)"},"loadMoreAmount":"all","defaultShowInfoExpand":1,"allowTitleExpand":true,"allowDescriptionExpand":true,"allowLinkExpand":true,"expandInfoPosition":0,"allowFullscreenExpand":true,"fullscreenLoop":false,"galleryAlignExpand":"left","addToCartBorderWidth":1,"addToCartButtonText":"","slideshowInfoSize":200,"playButtonForAutoSlideShow":false,"allowSlideshowCounter":false,"hoveringBehaviour":"APPEARS","thumbnailSize":120,"magicLayoutSeed":1,"imageHoverAnimation":"NO_EFFECT","calculateTextBoxHeightMode":"AUTOMATIC","calculateTextBoxWidthMode":"PERCENT","textBoxHeight":0,"textBoxWidth":200,"textBoxWidthPercent":50,"textImageSpace":10,"textBoxBorderRadius":0,"textBoxBorderWidth":0,"textsVerticalPadding":0,"textsHorizontalPadding":0,"titleDescriptionSpace":6,"customButtonText":"","customButtonBorderWidth":1,"customButtonBorderRadius":0,"loadMoreButtonText":"","loadMoreButtonBorderWidth":1,"loadMoreButtonBorderRadius":0,"imageInfoType":"NO_BACKGROUND","itemBorderWidth":0,"itemBorderRadius":0,"itemEnableShadow":false,"itemShadowBlur":20,"itemShadowDirection":135,"itemShadowSize":10,"imageLoadingMode":"BLUR","expandAnimation":"NO_EFFECT","imageQuality":90,"usmToggle":false,"usm_a":0,"usm_r":0,"usm_t":0,"videoSound":false,"videoSpeed":"1","videoLoop":true,"galleryLayout":2,"gallerySizeType":"px","gallerySizePx":300,"allowHover":true,"mobileSwipeAnimation":"NO_EFFECT","gotStyleParams":true,"showVideoPlayButton":true,"modifiedGallerySize":true,"selectedLayout":"2|bottom|1|fill|true|0|true","layoutsVersion":2,"selectedLayoutV2":2,"isSlideshowFont":false,"externalInfoHeight":0,"externalInfoWidth":0},"container":{"galleryWidth":2570,"galleryHeight":1440,"scrollBase":0,"height":null,"width":null}}
View before the hike at Mount Popa.

Mandalay, the last royal capital of Myanmar, located on the banks of Irrawaddy River is the economic center of Upper Myanmar and the center of Burmese culture. Apart from the plenty of historical monasteries and temples, the city is known for its Iconic Mandalay Palace, the last royal palace of the Burmese monarchy and Mandalay hill that serves as a sunset/sunrise point and a natural watchtower as it overlooks the city. You will also find similar sight at the the unique and beautiful teak-built U-Bein Bridge, in Amarapura as well as the remains of what was set to be the largest stupa in the world rest on the banks of the Irrawaddy River at Mingun. Mandalay and its surrounds can be very dusty during the hot season; it is often during the rainy season that you will find the most clear views. Mandalay as night time entertainment offers satire and puppets as opposed to bars or beer stations. Visitors wanting to enjoy the customary nightlife in Mandalay can be discontented with what the city has to offer. Then again, my motto for travel is “Be a Burman while in Burma.”

Hpa An, a picturesque town situated on the eastern bank of the Thanlwin (Salween) river is the capital of the Karen State. It is surprisingly underdeveloped given its proximity to Yangon. The area has conflicted with the Government for many years and has only recently become relatively peaceful. Caves and mountains surround the setting, and many of these mountains contain large and religiously significant caves. The laid-back atmosphere is one of the highlights of the area. In the center of Hpa An, you can find some teahouses and restaurants with English-language menus serving local and Asian foods, and at sunset, it is worth heading to the Strand Road riverfront for views over the Thanlwin River. To get a bit of background on local culture and history, head to the Kayin Cultural Museum

There are great views of Mount Zwegabin from the beautiful Kan Thar yar lake(a 15-minute walk from the center of Hpa An) and also a lovely roadside beer station(500 meters south of Hotel Zwegabin). To get to the locations around Hpa An, the simplest thing to do is to hire a Tuk Tuk. 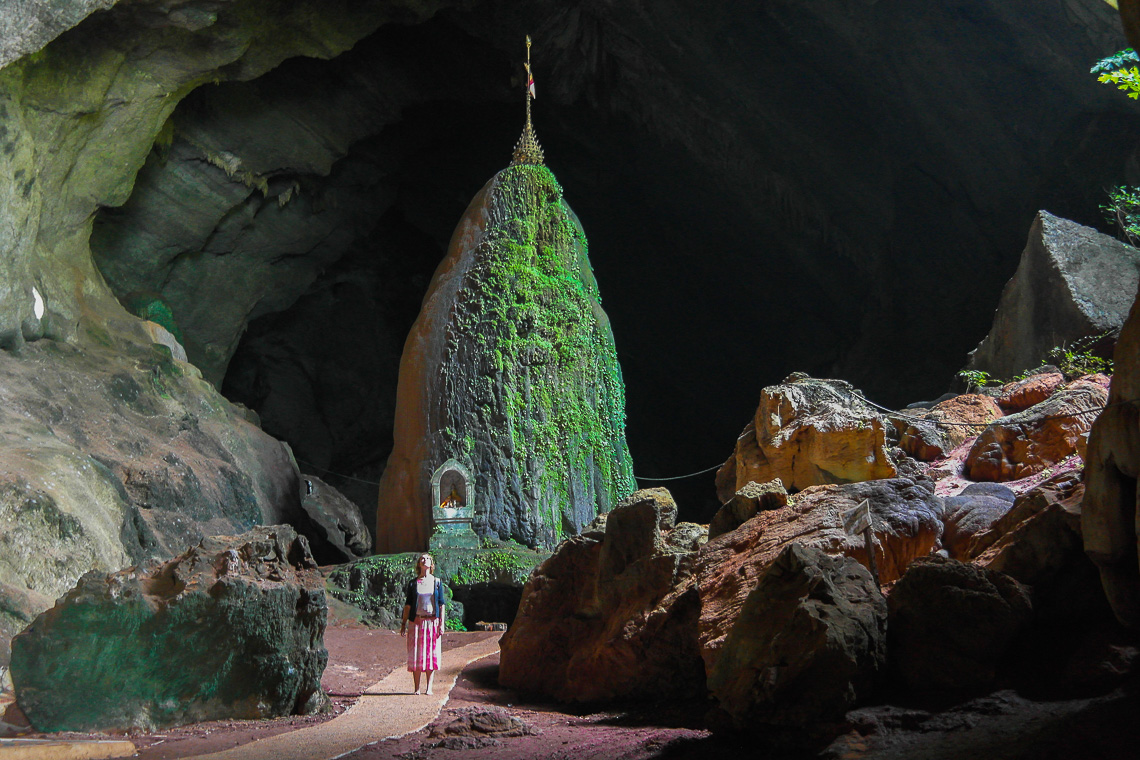 Visa: Find the official link below for all,

A photo essay of Churu, Rajasthan - The Town with a glorious past and a garbled present.

The findings of late-night walking - Solitary strolls in Singapore.

Thanaka, The skin conditioner - A household tradition in Myanmar.